Wishing you a very Happy Passover and Easter, and if you gaze up into the celestial sky tonight you will see the Pink Moon glowing.  This special Spring Moon is sometimes called a Full Sprouting Grass Moon, the Egg Moon or the Full Fish Moon. Since the pink moon is named after the blooming flowers of moss pink, it represents focusing on new and exciting things that could bloom in your life this season.  It pushes you to take an active role — focusing on that call to action and how that affects your current life circumstances.

This month’s Culturally Inclined concentrates on Soho exploring its’ dining, music, history, art, yoga scene, market reports and much more!  The name SoHo stands for South of Houston and is pronounced “HOW-stin”.  SoHo is bounded by Houston Street on the northern side, Canal Street on the south, Crosby Street on the east, and Sixth Avenue to the west, according to The Encyclopedia of New York City. The AIA Guide to New York City gives the western boundary of SoHo north of Broome Street as West Broadway.

Soho is a great area to meet friends for brunch and then leisurely wander its’ art galleries, clothing and furniture shops. As you traverse over the streets paved with Belgian blocks look up and admire some of the new developments in the area such as: 565 Broome by Renzo Piano Building Workshop, 150 Wooster developed by KUB Capital, 70 Charlton developed by Extell, XOCO 325, a former chocolate factory designed by DDG and paid homage to the area by fitting the front of the structure with a custom cast aluminum façade that appears to float over a hanging glass wall, 1 Vandam designed by BKSK Architects, 42 Crosby Street by Selldorf architects, as well as, the historical cast iron buildings built in the mid to late 1800’s.  Some of the finest buildings in the district include (see red numbers on map): 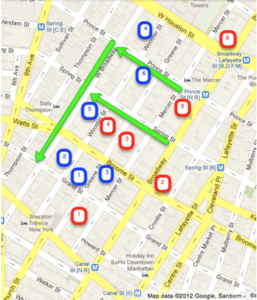 A former colleague of mine from Standard & Poor’s has devised a new roasting method to enhance the flavor of hand crafted top graded specialty coffee beans.  Join us for a Coffee Cupping Demonstration and Tasting on Thursday, April 20th from 5PM – 8PM.

There will be delectable treats to eat and “spirits” to add to your coffee experience.

Enjoy the blessings bestowed on you and look forward to hearing from you.

In honor of Poetry Month and the good weather enjoy a walking tour: Walt Whitman’s SoHo Historic District in New York City estimated time is 1 hour and 30 minutes.  As you ruminate upon Whitman’s  Mannahatta.

I was asking for something specific and perfect for my city, Whereupon lo! upsprang the aboriginal name. Now I see what there is in a name, a word, liquid, sane,    unruly, musical, self-sufficient, I see that the word of my city is that word from of old, Because I see that word nested in nests of water-bays,    superb, Rich, hemm’d thick all around with sailships and    steamships, an island sixteen miles long, solid-founded, Numberless crowded streets, high growths of iron, slender,    strong, light, splendidly uprising toward clear skies, Tides swift and ample, well-loved by me, toward sundown, The flowing sea-currents, the little islands, larger adjoining    islands, the heights, the villas, The countless masts, the white shore-steamers, the lighters,    the ferry-boats, the black sea-steamers well-model’d, The down-town streets, the jobbers’ houses of business, the    houses of business of the ship-merchants and money-    brokers, the river-streets, Immigrants arriving, fifteen or twenty thousand in a week, The carts hauling goods, the manly race of drivers of horses,    the brown-faced sailors, The summer air, the bright sun shining, and the sailing    clouds aloft, The winter snows, the sleigh-bells, the broken ice in the    river, passing along up or down with the flood-tide or    ebb-tide, The mechanics of the city, the masters, well-form’d,    beautiful-faced, looking you straight in the eyes, Trottoirs throng’d, vehicles, Broadway, the women, the    shops and shows, A million people–manners free and superb–open voices–    hospitality–the most courageous and friendly young    men, City of hurried and sparkling waters! city of spires and masts! City nested in bays! my city!

"Selling an apartment in the highly competitive NYC market is a challenge. Karen understood our requirements and became our 24/7 person. She guided us through the process of obtaining painting, and floor... continued"
- Joan and Ed
View All