Spring Fever is affecting both buyers and sellers as evidenced by the Monthly Contract Activity Report below; a 23.3% increase in contracts signed in March from the previous month.  The contract sale activity is spurred by the improving weather, low interest rates, an unemployment rate holding steady at 3.8%, good deals for buyers and sellers, and an attempt to close on residence(s) before July 1st to beat the New Mansion Tax change.

The NYS Legislature and Governor have finalized the State’s new budget. There are many new items in the budget – congestion pricing, a ban on plastic bags, etc., as described in the following NY Times article: March 31 NYT Article on New NYS Budget.

The NYS real property transfer tax will increase from .4% to .65% for deals of $3 million and up.

The first use in the New York Times of the term “East Village” to refer to the east side of Manhattan between Fourteenth and Houston Streets was on February 7, 1960.1 Edmond J. Bartnett wrote, “The walls of Jericho came tumbling down when the Third Avenue El was razed four years ago. …When the El was wiped out, the barrier was broken between the Village and the Lower East Side.” The article reported that high rents had pressured many Greenwich Village renters, whose search for lower rents now led them to look at what they had recently considered “a slum area without comfort or prestige.” The article continued: “Rental agents — some of them advertising rooms for ‘$40 and down’ — are increasingly referring to the area as Village East or East Village.”  – GVHSP 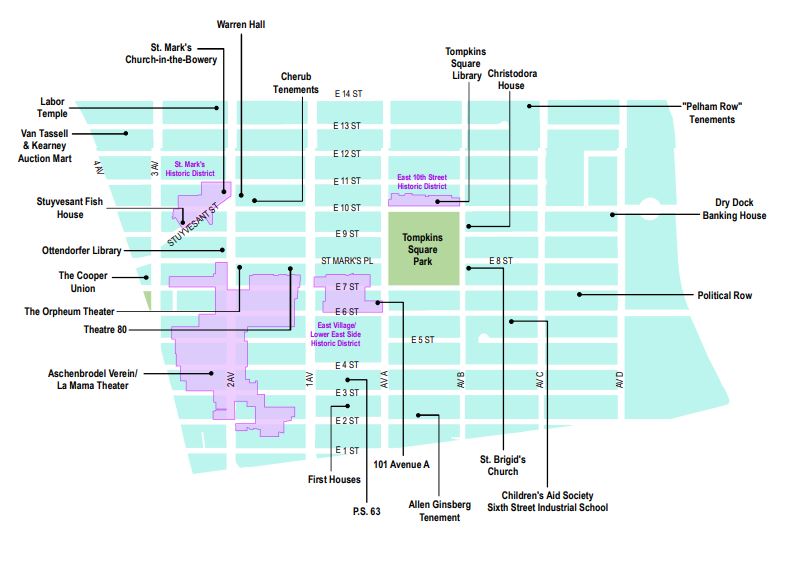 The East Village contains three New York City historic districts: St. Mark’s Historic District and Extension, East Village / Lower East Side Historic District, and East 10th Street Historic District, which comprises Alphabet City.  Alphabet City’s name was derived from its Avenues ‘A’, ‘B’, ‘C’, ‘D’; the only avenues in Manhattan to have single-letter-names.  Alphabet City has a long-standing reputation as the home and hang-out spot for “free-thinkers, musicians, artists, and eccentrics” and remains a cool area to eat, drink, shop, and explore this off-beat iconic neighborhood. Long forgotten along with Avenue D and the East River is the “Dry Dock District” for the famous shipping industry throughout much of the 1800s.  A group of shipbuilders came together as the New York Dry Dock Company to construct an inclined railway at the foot of East 10th Street to pull ships from the water for repair and by the mid-1800s there were shipyards extending along the East River from Grand Street to 12th Street. In honor of this district of the past, the City of New York created the Dry Dock Pool and Recreation Center on 10th Street and Avenue D. The Greenwich Village Society in coordination with a report titled: A History of the East Village and Its Architecture has devised an online tool called “The East Village Building Blocks” to explore and provide a detailed look at both present-day and a glimpse into the history of 2,200 neighborhood buildings. The online interactive tool offers information such as the original architect, date of construction, original use, alterations over time, and any other significant information tied to the building and/or its site.

The rich historical landscape of various immigrant populations establishing their roots in America and the anti-establishment cultural revolution of art, music, and theater in the East Village is quickly vanishing. St. Mark’s Place played a key role in launching the careers of artists such as Keith Haring and Jean-Michel Basquiat. St. Marks a main cultural Street in the area once home to funky shops and tattoo parlors is now home to a hip speakeasy behind the phone booth in Crif Dogs, restaurants like Empellon Al Pastor, authentic Amalfi Coast pizza at Tramonti, Spot dessert bar whose “confections are re-imagined and spiked with a healthy dose of Asian flair”.  EATER acclaims the East Village as the best dining neighborhood in New York City; (examine the Ultimate Guide to Eating in the East Village), and 18 of the most outstanding dessert spots. My favorite dining and dessert spots are Desnuda, Black Ant, Veselka, Hearth, the Eddy, Mayahuel Mariposa, Prune, Upstate, Veniero’s Pastry shop dating back to 1894, and Davey’s ice cream parlor.  Thompkins Square Park, a 10.5-acre public park in the Alphabet City portion of East Village is a respite from the hustle and bustle and a sanctuary to commune with nature and the community.  The park was originally swampland and graded and landscaped in the mid-1800s to create an open parade ground for the 7th Regiment.  Three Sycamore trees have survived from that time.  It was not until the late 1800’s that The New York State Legislature was pressured from the community to officially redesign the area and plant over 450 trees and officially declare it a Park.  The Park had a face-lift in the 1990s’ and a dog run and playground were added.

The New York City Naturalist Club: Hawk Watch in Thompkins Square Park
Urban Park Rangers will guide you to the best wildlife viewing spots in the urban jungle. Birding programs are appropriate for all skill levels and beginners are welcome.

Hot Restaurant “Violet” and “Van Da” At Violet in Alphabet City, Matt Hyland focuses on the Rhode Island style of grilling dough and then topping it with fontina cheese and various ingredients. Click on Link to visit the Violet  511 E 5th St website.

” Lived in an apartment out on Avenue A / I had a tar-hut on the corner of 10th,” “Used to take the subway up to Houston and Third / I would wait for you and I’d try to hide,” “I remember Christmas in the blistering cold / In a church on the Upper West Side,” “Found a lot of trouble out on Avenue B / But I tried to keep the overhead low.” ― Ryan Adams (“New York, New York“)

Note: Click on tiles and Hyperlinks for further information.

"Karen and I were co-workers in the finance industry prior to her becoming a realtor.  Choosing her as my realtor for a purchase of a condo in NYC was not a difficult decision, as I knew the quality... continued"
- Belinda and Gary
View All