Wednesday, March 20, 2019 marks the official day of Spring and the start of  Real Estate Selling Season for Buyers/Sellers.  The confluence of low mortgage rates and longer days excite buyers and sellers.  Moreover, Freddie Mac as of 2/21/19 reports, “mortgage rates fell for the third consecutive week, continuing the general downward trend that began late last year. Wages are growing on par with home prices for the first time in years, and with more inventory available, spring home sales should help the market begin to recover from the malaise of the last few months.”  Additionally, Freddie Mac predicts interest rates to rise to 5.1% by the end of 2019 and Core Logic predicts home prices to appreciate by 4.8% over the next 12 months meaning if these predictions come true and “buying a home is your plan for this year, doing it sooner rather than later could save you thousands of dollars over the terms of your loan (click on Keeping Current Matter’s link for a simple demonstration of the monetary impact)”.

It is reported that they “sold” the island of Manhattan to Dutch traders for $24 worth of beads on May 24th, 1626 to the Dutch West India Trading Company and later owned by the Van Cortlandt family. According to Wecksquaesgek Indian, Bobbie Hawkfeather, the last full-blooded Weckquaesgeek. His people got the better end of the deal. [Harlem World]

The original settlers of Harlem were the Wecksquaesgeek Indians, who raised corn and tobacco, and named the land Quinnahung, or Planting Neck.  The Wappani were most closely related to the Lenape and Mahicans, all speaking the Algonquian languages. The first homestead in Harlem was established in 1639. Called Zedendaal, “Blessed Valley,” it was staked by settler Jochem Pietersen Kuyper, an early colonist and who was ultimately killed by the Lenape Indians.  The area was then named Nieuw Haarlem, by early Dutch settlers after a city in Amsterdam and was a farming community in the mid-1600s through the seventeenth and eighteenth centuries.  In the eighteenth century, Harlem was the site of many American Revolutionary War Battles.  A few sites that should be on your must-visit list is Manhattan’s oldest house was built in 1765 by British Colonel Roger Morris: Morris-Jumel Mansion, The General Grant National Memorial in Riverside Park; the largest Mausoleum in America, and the final resting place of 18th President and Civil War General Ulysses S. Grant, Hamilton Grange National Memorial, which preserves the home of founding father Alexander Hamilton. And, even a French second empire style house designated as a Landmark from this era – 17 East 128th Street still remains a family home.  The advent of the implementation of the Grid system, the New York and Harlem Railroad, the underground subway system; the Interborough Rapid transit, and the elevated railway changed the rural landscape of Harlem forever.  After the 1896 economic depression an World War I, came the Great Migration where 6 million African American’s migrated from the rural South to the urban Northeast sparking the Harlem Renaissance.  “This renaissance allowed the city to thrive on a refined understanding and appreciation of the arts. In addition, artists, performers, musicians, and writers gathered together in Harlem to start the beginning of one of the most influential time periods in African American history“.

The Harlem neighborhood continues to evolve and is undergoing its own rejuvenation. Harlem’s Future Tallest mixed-use residential Skyscraper, at 260-270 West 126th Street renderings, has been revealed and will comprise a church, a 3-story theater, and 34 residential floors. Curbed reporter Ameena Walker maps the rental and condo developments taking shape in the area in her article: “Central Harlem’s New Residential Development Surge“. 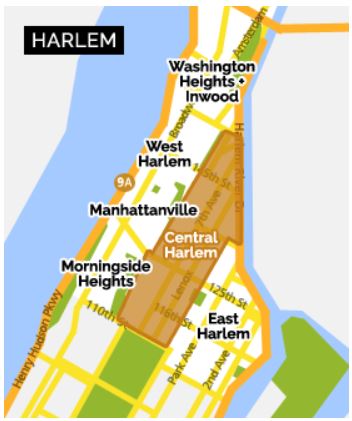 East Harlem known also as “Spanish Harlem” or “El Barrio” boundaries are defined as Fifth Avenue to the west, Harlem River to the East, East 138th to the North, and 96th Street to the South.  East Harlem is an area in transition where Bodegas, Botanicas, and New Buildings and Cultural spots: El Museo del Barrio Museum, National Black Theater, The Africa Center, are coming together forming an “eclectic vibe”.   [New York Times, 10/4]

Central Harlem has been a cultural and artistic mecca since the 1920s and the birth of the Harlem Renaissance where it gained notoriety for its diverse population and rich heritage. Just this past year, the Landmark’s Commission designated Central Harlem West 130th – 132nd Street as a Historic District consists of approximately 164 properties, primarily row houses with a handful of an apartment and institutional buildings (Neo-Grec, Queen Anne, Renaissance Revival, and Romanesque Revival styles [Curbed NY, 5/30]). “Constructed during the speculative building boom that created Central Harlem’s row house neighborhoods in the late 19th century, this highly intact district illustrates not only the architectural development of Harlem, but the rich social, cultural, and political life of Harlem’s African American population in the 20th century.” The Central Harlem neighborhood extends from the north end of Central Park at 110th Street to the Harlem River, and from 5th to St. Nicholas Avenues.

West Harlem an iconic area has experienced many changes due to gentrification in recent years, yet retains its character with quiet, tree-lined streets and magnificent turn-of-the-century rowhouses.  The neighborhood extends from 96th to 155th Street, bounded by Frederick Douglass Boulevard to the east and the wide Hudson River to the west, and includes the smaller neighborhoods of Morningside Heights, Manhattanville, and Hamilton Heights-Sugar Hill. West Harlem Development Corporation’s mission is to create economic opportunities for the area and as a consequence is collaborating with Columbia University in the City of New York on a 25-year campus expansion project. This educational mixed-use complex began in 2009 and will eventually span 17 acres and will include academic, commercial, cultural, community facility space, and open public space. [West Harlem Development Corporation] [New York Times 02/13]

Harlem: The Migration and Integration of America’s African Voice
The migration of African Americans from the South to Harlem fostered a direct dialogue with immigrant African descendants from the Caribbean and the broader diaspora. At this time, Harlem was also the city’s second-largest Jewish community. This proximity fostered black engagement with the area’s immigrant Eastern European and Russian Jews. From this evolved the rhythms and language of the American Songbook. This walking tour focuses on those points of interaction—theaters, religious institutions, and cultural venues—that shaped that dialogue. Apollo Theater – Saturday, April 20th – 11AM

Tell your friends and family that I am on duty to help with their home purchase and selling plans for 2019.  The Warburg Way is best encapsulated in Fred’s blog article “At Your Serve“: “At Warburg, we recognize that being entrusted with a client’s listing or a customer’s new home search is a significant responsibility. We are not in business for the quick buck. Our goal remains what it has been for the last 120 years; to build relationships with those whose needs we serve through the deployment of our experience and expertise, wielded with the integrity for which the brand is known. In that way, we are proud to serve!”

Explore my Website:  http://www.karenkostiw.com and let me know what you would like me to include to best serve you.  We can connect on Instagram to share our New York City favorite pictures and experiences throughout the year.

“Whether we consider hip-hop as an evolved manifestation of the Harlem Renaissance or something completely new under the sun, it clearly has moved beyond the stage of just entertaining lives to that of informing and empowering lives.”
― Aberjhani, Journey through the Power of the Rainbow: Quotations from a Life Made Out of Poetry

As one who loves literature, art, music and history, I’ve been deeply rooted in the Harlem Renaissance for many years.― Debbie Allen

"Karen’s unique background in business and liberal arts distinguishes her from other real estate professionals we have worked with in the Tri-State area in general and Manhattan in particular. In addition... continued"
- Vivian & Calvin
View All