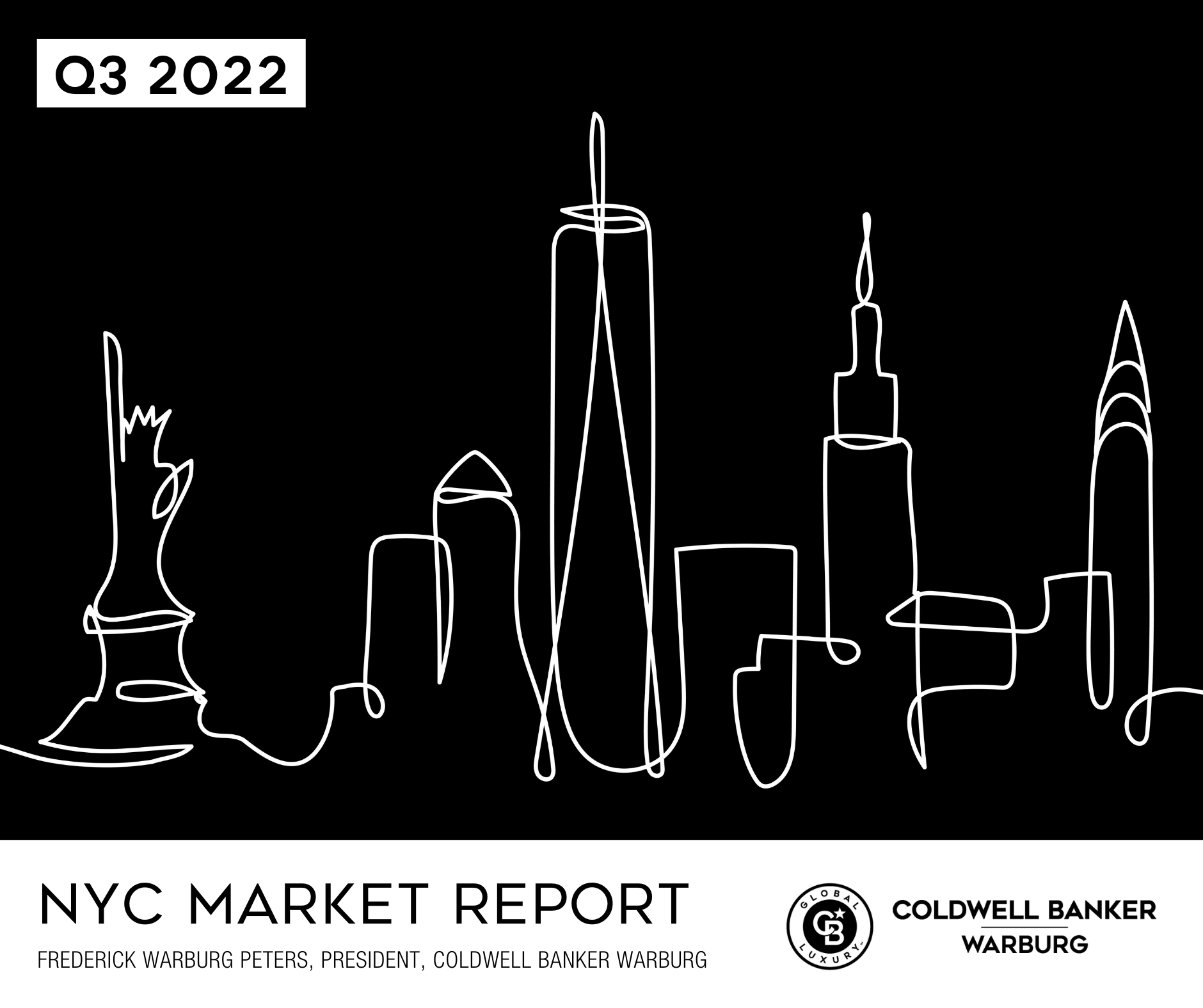 Many sales prices are down (though not all).  Furthermore,  the spike in inventory which would have given buyers more options has failed to materialize at hoped-for levels. The city has entered what I like to call a “tornado market.” Moreover, one property receives multiple offers while the similar one next door sits idle with nary a showing request. While much of this may be attributable to the condition.  Partly due to supply chain issues and co-op Boards still making many buyers wary of apartments needing renovation. There remains a quality of randomness to what sells and what doesn’t. That said, prices continued to differentiate throughout the quarter based on size, property type, and location.

Size. Smaller and midsized properties traded far more briskly throughout the third quarter than larger units. For much of the summer, the greatest condo sales activity occurred in Brooklyn and Queens. In Manhattan, sales were the briskest for smaller units. While there were sales of marquee properties. The $10 million and-above condo market was considerably quieter than last year. Townhouse sales reflected a similar bias: with few exceptions.  The properties above $10 million are lingering on the market. And in the co-op market, many of the beautiful large pre-war apartments along Park, Fifth Avenues, and Central Park West have been aspirational homes for many New Yorkers. Now linger for months, even years, without buyers.

Property Type. As a general rule, the simpler ownership experience offered by condominiums continues to appeal to buyers. With their beautiful amenity floors offering everything from meeting rooms to movie theaters, from restaurants to professional-level fitness centers, these luxurious newly built buildings offer the ease of a move-in-ready home. Fewer buyers are inclined to embark on a soup-to-nuts renovation in the pandemic world. As noted above, supply chain issues and the vagaries of co-op Boards that must approve renovations further incline prospective buyers away from older units needing upgrading. As more and more condominiums rise in all parts of the city, more and more New Yorkers, both new to the city and those who have been here forever, choose this form of ownership. While many co-op dwellers now move to condos, the converse is rarely, if ever, true.

Location. Nice two-bedroom, two-bath units on the Upper West Side, even those needing work in older co-ops, sold throughout the summer within a few weeks. Meanwhile, their counterparts on the Upper East Side seemed to spend more time on the market and then sell for less. Everything in the Village, priced right and not too quirky, sells briskly.  Furthermore, properties in the East Village where no one had a choice would have been considered living forty years ago. In addition, many Harlem properties move slowly.  This includes the newer condominiums at prices lower than those the current owners paid. Brooklyn remains hot but slower than it was a year ago; the Brooklyn frenzy has abated.

During the third quarter, the NYC rental market continued to experience an unprecedented price run-up, which began earlier in the year. Inventory has been thin, and during the summer, prospective tenants were offering more than the asking rent just to secure the property. While the market has cooled a little in September, this remains one of the tightest quarters in recent history for inventory in the rental market.

And what can we expect in the coming months? As the Fed continues pushing rates up to combat inflation, these rate increases will continue negatively impacting stock prices.  A mild recession seems increasingly likely even as unemployment remains low. Prices will thus continue a mild contraction throughout the fourth quarter, especially in the lead-up to the midterm elections.

Buyer opportunities will abound for those brave enough to look past the current economic trends to the longer-term value in real estate ownership.

"Karen was the ideal realtor for our needs. We found our beautiful apartment with incredible architectural features in Midtown East after 2.5 days of visits to numerous locations, all happening smoothly... continued"
- Judith
View All