The good weather appears to have arrived just in time for the Memorial Day weekend, marking the unofficial beginning of summer.  We are blessed to enjoy our freedom due to the dedicated people who gave their lives serving our nation and us personally.  The National moment of remembrance for the fallen military is 3 PM.

Wherever we gather today ‘neath “The Stars,”
Let’s honor the living now wearing the scars
Which they brought from the fields of battle and strife,
While protecting “Our Flag,” and our Nation’s life.
Let the flowers bear tribute in their simple way.
And each one remembers Memorial Day;

We are at an inflection point in the market where buyers and sellers are arriving at an agreed-upon price and moving product at a more rapid pace.  Escalating trade war concerns are keeping interest rates low, however, over-all construction costs will rise. This is a good market for buyers given the selection of products to choose from and the seller’s willingness to negotiate.  Additionally, new developments are seeking to sell remaining units and are offering more concessions to entice buyers to complete their projects.  Miller Samuel’s reported in a New Deal article: New Development Agents’ Get Stretched Thin that “Data shows the average sale price of a new development unit dropped by nearly 17 percent, to $4.1 million. And the absorption rate — or how long it would take for all existing inventory to sell out — for new condos was 8.2 months, some 24 percent higher than it was in 2016”.  Buyers are out in the market picking up good deals as reflected in the Contract Activity Report in the chart below demonstrating at 15.6% increase from last month and 11.6% from last year. 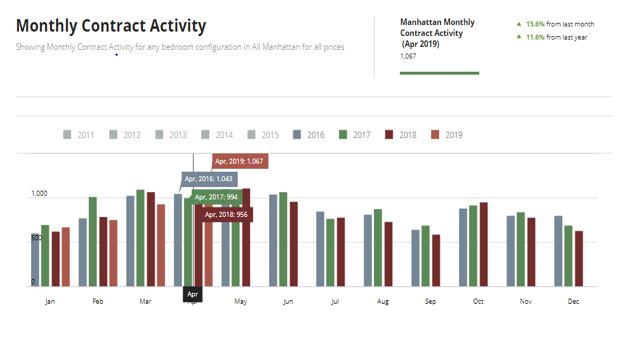 This months Culturally Inclined takes us to the industrial neighborhood of Soho and provides a history of the landscape and people behind the street names, a walking tour to examine the Cast Iron Historic District’s landmarks where there are over 250 cast-iron buildings built in the mid to late 1800s, cutting-edge spaces to enjoy music while sipping delicious cocktails, insight into the gallery & fitness scene, the Soho Design District twice a year comes together in celebration of design, fashion, an architecture where galleries, showrooms, museums, and trade fairs host exhibitions, tours, and conversations, highlight some of the neighborhood’s best brunch spots and for those who want to know the up to the minute real estate trends click here for 1st Quarter overview.  When walking the streets take a closer look at the historic buildings and you will find Cast iron foundry stamps that indicate what company manufactured the components that make up a building façade usually somewhere on the ground floor of a building or down low near the sidewalk. You know you are in a historic district when street signs change to a brown color.  The brown signage was introduced in 1989 to demarcate historic districts on the 25th anniversary of the Landmarks Law. Only streets within official historic districts can have the brown signage and were designed to blend nicely with New York’s limestone and brownstone buildings. 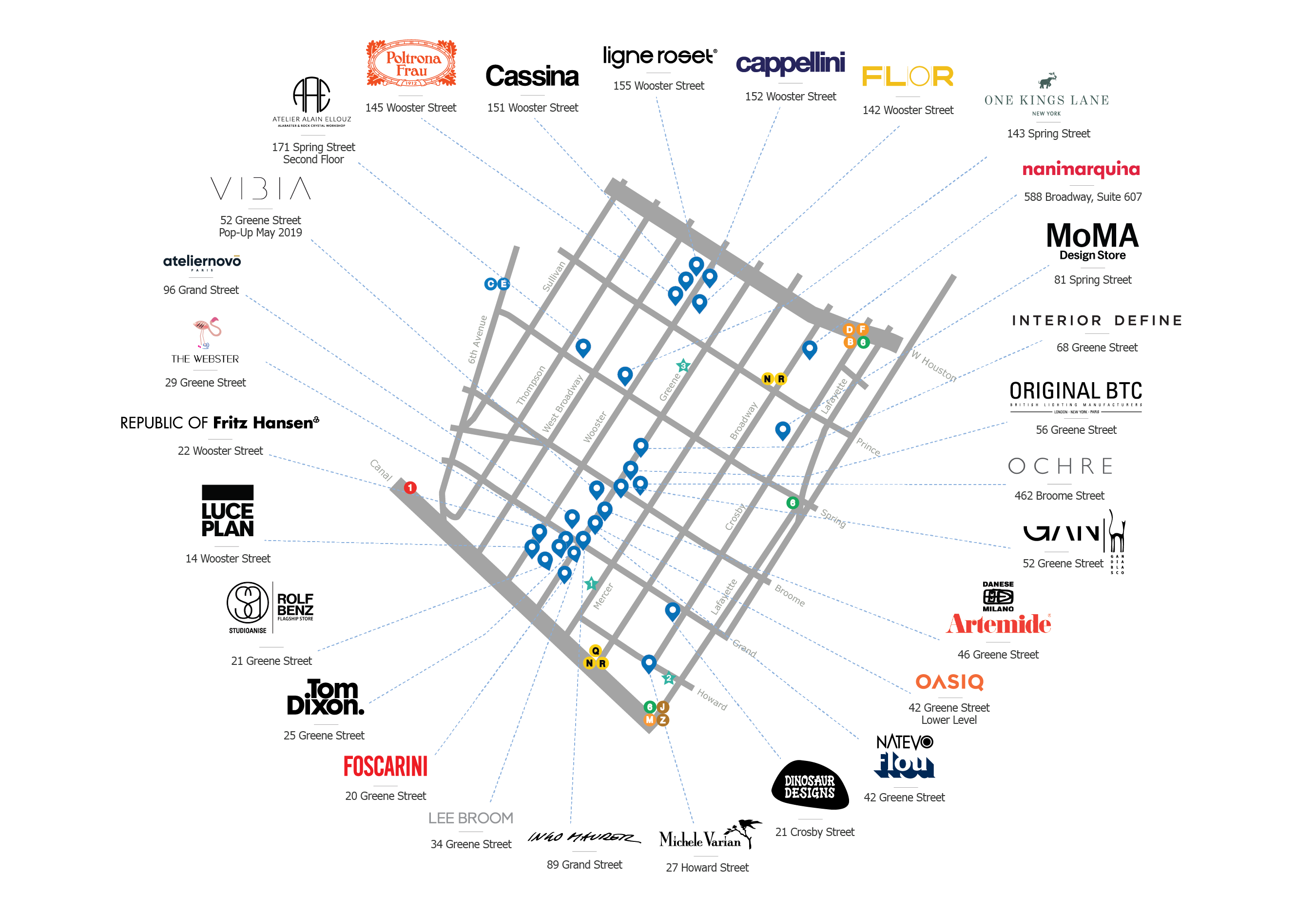 SoHo buildings largely were built by manufacturers and wholesalers in the last half of the 1800s. By the 1950s, tenants began leaving as the city lost manufacturing jobs.

That’s when things got complicated. Artists and galleries started illegally occupying space in the increasingly desolate neighborhood, and they spruced up vacant buildings that otherwise would have deteriorated.

The city amended the zoning in 1971, but only to legalize live-work spaces explicitly for artists. Two years later the neighborhood was landmarked. And in 1982 the state passed the Loft Law, which allowed certain tenants using space illegally to apply for protection from eviction. The statute required building owners to bring their property up to code under the oversight of a special board.

Since then the neighborhood has become a popular location for office space, which is allowed under the industrial zoning. Not so ground-floor retail and pricey new apartments, yet they also have proliferated through a variety of indirect means, according to a zoning guidebook released this year by the SoHo Broadway Initiative, a business-improvement district focused on the area’s main shopping corridor. Craines September 2018

Zoning change discussions are underfoot in Soho and many residents are concerned that these changes will compromise the historical character of the neighborhood by kowtowing to city mandates, developers, and large box retailers. Work/Live Artist Lofts, residential apartments, and ground-floor retail have crept into the landscape that is not always legal under industrial zoning rules on the books spurring growth and confusing ownership rights.  Currently, ad-hoc special approvals were granted, other space-designations were grandfathered or believed to be legal under an older zoning law causing confusion and strife since everyone is not abiding by the same rules.  However, ascertaining an agreed-upon zoning plan from the many stakeholders will be challenging.

La Esquina a hidden gem. an upscale Mexican restaurant is hidden in the basement of a taco shop.  Give your name to the doorman or call for a reservation to be ushered through the secret door to the underground hideaway.   La Esquina– 114 Kenmare Street.

Raoul’s I have been going to for steak-frite since I arrived in NYC.  A classic Parisian bistro established in the 1970’s by two brothers who traveled from Alsace to Soho.   Raoul’s – 180 Prince Street

“Soho is a gritty former mercantile area that has, of course, evolved into the most bourgeois neighborhood in New York” – Andre Balazs

Note: Click on tiles and Hyperlinks for further information.

"Karen was absolutely the greatest. It was a difficult time for my family and I, dealing with the passing of my sister. The process of handling her estate was not an easy task especially with traveling... continued"
- Helen, Joi & Family
View All